He also informed nominated officers of the Directorate  that their letters of appointment will be ready for pick up the following week.

Mr. Tayo Ayinde went on to introduce the Director of Outdoor Promotion and Management Comrade Ayodele Adewale to members of the Directorate and the general public.

In his welcome speech Comrade Ayodele Adewale went down memory lane to first of all thank GOD for providing him the opportunity to serve. He also thank Asiwaju Bola Ahmed Tinubu and Hon Tayo Akinmade Ayinde who served as destiny helpers, mentors, guardian and father’s. He also thanked Cardinal Odunbaku (Baba Eto) for his support and fatherly care in his political career.

He reiterated the major assignment of the directorate which is to oversee the branding, distribution, pasting, supervision and management of publicity materials of the ICC such as posters, handbills, LED screens, billboards et al across Lagos State. With a view to generate awareness and create a visual promotion and publicity for all APC candidates.

He said the directorate will ensure wide coverage of posters in the nooks and crannies of Lagos State in support of our great Party and its candidates and promised that anyone who excels well in the task will be well appreciated during and after the course of the assignment.

In his speech,  Hon. Musiliu Aiyegoro, the Director of Local Government Affairs confirmed the ICC’s decision for the assignment to be done at the grassroots level by Party members who are conversant with their communities. He stated that instead of giving the job to professionals who are not fully committed to the cause, the ICC is of the opinion that APC members know the local terrains better and will penetrate farther and faster than anyone else.

In this regards, Ward Chairmen nominate 5 persons each, while the Council Chairmen also send in  5 names per ward. This, he said, is aside of the 13 member executive of the Directorate.

Work kits invluding rollers, brushes and thousands of posters of Asiwaju Bola Ahmed Tinubu and Governor Babajide Olusola Sanwo-Olu were also presented to the coordinators and members of ICC in each Local Government.

Members received the materials with joy and promised to move to their wards to paste and monitor the posters as planned. A WhatsApp monitoring system was put in place to follow up with activities of members at the 377 wards in Lagos State. 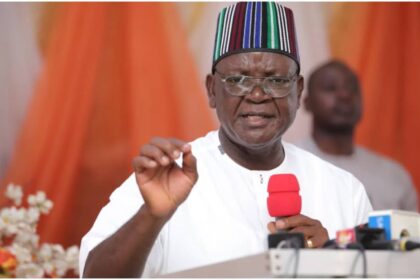