Duke, stay away from Uyo

The call came on a Saturday. I remember cos I was in traffic and wondering what this Tinubu’s Lagos have turned into

Duke, you have the guts to send me a broadcast on Akan Udofia that insolent boy. I knw his father and I have asked him many times how such a silly boy came out of his loins.

I say madam please don’t vex. I didn’t know you are on my broadcast list. I will remove you.

Please I don’t have juju and don’t go to church so I can not fight or even repel ur attack. Eka nmi ku yad esit. I begged in Ibibio.

I could have been talking to an Eskimo. Akan has the guts to come out for election in this our Akwa Ibom

Who the hell is he? The small boy. If not for his father. I am spitting on the ground, he cannot even stand beside my first daughter who is presently studying at the University of Uyo.

And that big headed Scott. I will deal with all of them as for you Duke make sure you don’t step in Uyo for a long time otherwise you will have yourself to blame.

You see what mummy did not know is that I wrote the manual for Cowards in Politics.

Me? Step Akwa Ibom for what. When I heard of the incident in my big Oga’s house – Mr Ufot, I had sworn not to near Aba talkless of Uyo.

So big headed mummy with flabby breast didn’t have to issue the Fatwa. I no dey come.

Once during dinner in Dubai, I asked Akan. Akan u no dey fear? What if dem violently move against you.

He smiled while downing clean expensive wine,’ Edgar a man must be a man. A man must stand for something’.

I look Scott and Scott nod him head. I great them and hail them, me no be that kind man. I am on self exile.

This is the first time I am receiving this kind of threat in my life. The closest na one mumu Pastor in Shomolu who saw prophesy for me that I will die. I use police arrest am.

Akwa Ibom is a blessed place. With this Akan victory at the courts, it is about to live up to its destiny and Akan is up to the task, dem no need me.

Mummy has warned me and I have taken heed. But Kai so I won’t eat afang again at The Castle in Ewet Housing or eat fish in Oron or hang out at the Ibeno beach and look at Akwa Ibom damsels as they preen and walk around daring the Duke to touch.

Well that is a little sacrifice to make for the glorification of our dear State. If it is because of me that Akan will not emerge, mbok make una throw me like Jonah into the belle of a female fish.

When mummy finished frothing from the mouth, I told her thank you I have heard. I will not come because it is you and your mumu family that own the state.

These kinds of parasitic imbeciles have a lot to gain by retaining the vacuous regime that is only plundering and not giving back.

And people like mummy who over the years have leached on the system and would do anything within their powers to maintain staus quo even up to issuing a harmless useless threat to The Duke.

I have only one phrase for her and her ilk and I borrow it from the world famous philosopher Burna Boy – Na God go punish una. 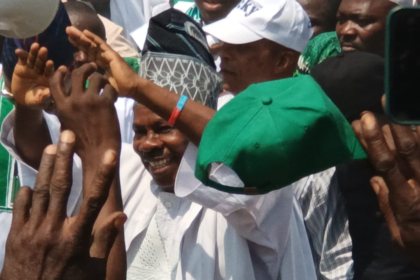