The Speaker, Plateau State House of Assembly, Yakubu Sanda, has escaped abduction as gunmen stormed his residence at the Federal Low-Cost Housing Estate in the Jos South local government area of the state.

A source close to the Speaker’s house disclosed that the kidnappers, who were three in number, arrived at his residence and made an attempt to kidnap him, but were resisted by the security men attached to his residence before reinforcements from the Divisional Police Headquarters in the area arrived.

The State Police Command, which confirmed the incident in a statement signed by its spokesman, Alfred Alabo, said the Command’s effective and proactive crime prevention strategies have been yielding enormous and laudable operational successes in recent times.

According to the command, the strategies put in place have assisted in foiling the kidnapping attempt on the Speaker.

It pointed out that at about 11:00 p.m. on Friday, while the Speaker arrived at his residence at Federal Low-Cost in the Jos-South local government area of the state, three unidentified gunmen operating in an ash-colored CR-V Jeep trailed him to his residence and attempted to enter his house to kidnap him.

“But their mission was made impossible by the intrepid police officers on guard duty and the timely response of the Divisional Police Officer (DPO) of Rantya Division, SP Ayuba Iliya, and his men, who joined forces with the men on guard duty and repelled the evil act.”

“However, the Command is making a concerted effort to track down the fleeing suspects and get them arrested.”

The State Police Command thanked members of the public for showing concern about the happenings in their various communities and volunteering to give timely information to the Police for prompt action. 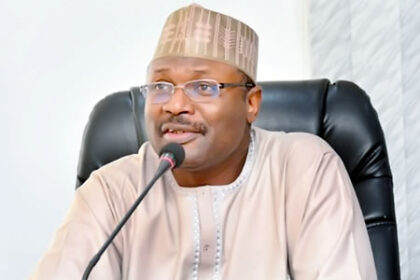