I believe this is worth SHARING!

I LONG FOR THE DAYS OF WESTERN NIGERIA*

Many people, today, (including those in their 50’s!) don’t know this.

I long for the days of Western Nigeria. I long for those days when I lived in peace, knowing that I was well taken care of.

When my then Premier (Chief executive of Western Nigeria) – Obafemi Awolowo didn’t have to wait, every month, for Federal Government allocation, before doing for us what development plans he had.

There was a time in this country when we actually had THREE COUNTRIES effectively within the country. And each country was RUNNING SMOOTHLY on its own. It’s like England, Scotland, and Wales (each of them individual countries in themselves, with their own flag, anthem, etc.) yet making up the country called Great Britain.

These three countries (just like England, Wales and Scotland) had a jointly-agreed-upon federal government which only took care of matters of COMMON INTEREST – like Defence, for instance, but was NOT a humongous task-master that keeps breathing down the neck of those Regions.

Yes, we called them Regions, but the truth was that they were DIFFERENT COUNTRIES which had decided to come together to operate a FEDERAL SYSTEM. A Federal System in which the REGIONS WERE THE MASTERS OF THEIR OWN DESTINIES.

Similarly there were all other MINISTERS – because these were COUNTRIES on their own. The Federal MINISTER OF EDUCATION was NOT in any way a superior to the Regional Ministers of Education. He simply supervised those educational institutions that were strictly owned by the joint Federal Government belonging to the THREE REGIONS – the THREE COUNTRIES.

The 3 Regions actually owned the Federal Government, and not the other way round! Just as the countries of West Africa, today, own ECOWAS.

Western Nigeria had its own FOREIGN EMBASSIES. We chose our own foreign friends. And they didn’t have to be the same countries that Nigeria at the Federal level related with.

There was NO unified salary structure. I remember Western Nigeria paid the highest civil servants’ salaries in the entire Federation! It was one of the reasons there weren’t many Yorubas, relatively speaking, in the employment of the Federal Government!

Our Igbo brothers on the other hand flocked to Lagos as their region paid far less than the Federal Government.

Because, what were you looking for in the Federal civil service, when Western Nigeria could pay more. It sounds too good to be true, but it’s not only TRUE, but, also, they don’t want you to know this TRUTH, so that you won’t long for those days, and so that they can keep you and your people in BONDAGE to this present Federal Government that is now alpha and omega.

When every other region (and the colonial masters too) thought it was IMPOSSIBLE to give free education to children, Western Nigeria said we can do it. And WE did it. Boy! Education became FREE in all PRIMARY SCHOOLS in Western Nigeria.

Most of us attended MISSION schools in those days, as there were only very few schools established by government itself.

But the free education given by Western Nigeria was to ALL children in primary schools. Yes, all children So those mission schools, compulsorily, STOPPED charging fees! The Western Nigeria government (because it had control of its own resources and was NEVER in any way tied to the apron strings of the Federal Government) provided for ALL the schools – regardless of whether they were directly owned by government or not!
That’s why many people think that my generation attended public schools. The truth is that, if public schools mean schools owned by government, there were VERY FEW SCHOOLS OWNED BY GOVERNMENT.

IN THOSE DAYS, and most of us actually attended schools owned by missions – churches. But my dear Western Nigeria gave ALL OF US free primary education, whether in Government or Private Mission Schools !

And they intended taking it higher before the Army truncated that system in 1966.

My dear Western Nigeria established the University of Ife. Awolowo was not as parochial as those of recent years. He did not take the University to his place at Ikenne, Ogun State. He could have done it then.

Now, go ask your elders what is meant by University of Ife. They will tell you that it is that University which struck WORLD-WIDE ATTENTION right from its inception!

It’s not for nothing that it’s called “GREAT IFE” From its very inception, it shot to the limelight Professor Banji Akintoye, a renowned historian, RESIGNED his position at the University of Ibadan (which had been established by the colonial masters after the pattern of British universities) to go to Ife! Ife was IRRESISTIBLE! Ife became THE STANDARD.

Because Western Nigeria had their Destiny in their own hands, and we pursued it with vigour, until they took away our patrimony from us!

The military struck in 1966, and, with one thing leading to another, they gradually TOOK AWAY THE SOVEREIGNTY OF THE REGIONS and gave the powers of those regions to a humongous and behemoth Unitary Government of Nigeria that now CONTROLS OUR DESTINY.

They took the University of Ife away from us (commandeered it, military style) and made it a FEDERAL UNIVERSITY Go and ask those who know, they will tell you that that’s the day the UNIVERSITY OF IFE STARTED GOING DOWN.

They now sought to placate us, later, by naming it OBAFEMI AWOLOWO UNIVERSITY. Na dat one we wan chop? It is time now that we behind to act towards taking back our sovereignty! We need to take back our property. We need to start the fight to get control of our own resources.

We are TIRED of your Nigeria that is suffocating us!

The so-called Federal Government controlled by Northerners soldiers took over our patrimony. This was sadly but naively aided by our own Chief R.A. Ogunlade , the then Federal Minister of Information

The Unitary Government of Nigeria took over our Liberty Stadium and other icons of our achievements as a proud Yoruba Nation.

It is fact of history though that our brethren YORUBAS in uniform were naive and got carried away by the fake promise of a United Nigeria. Their antelope was sadly in bed with the hyena of the Fulanis. Very sadly indeed to have been akimbo while their Northern colleagues got away with cunning deception.

Now that the fake Federation has turned out to be a Unitary Government of Nigeria, the time is nigh to start the quest to regain the Yoruba Nation.

The time is nigh.

GIVE ME THE OLD WESTERN NIGERIA.

MAY GOD BLESS THE ODUDUWA PEOPLES OF THE WORLD. 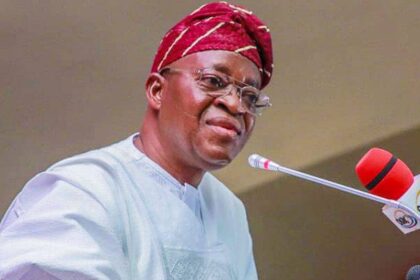