BEING A TEXT OF PRESS CONFERENCE HELD, ON THE STATE OF KOGI STATE POLITICS, HELD AT AREWA HOUSE, KADUNA ON MONDAY, 14TH NOVEMBER, 2022

Says Yahaya Bello would be held Responsible Should Anything Happens to her….

The Arewa Women in Politics, a network of active  women from various political parties, mainly of Northern Nigeria extraction has noted with grave concerned the deliberate effort of Governor Yahaya Bello of Kogi State to silence Barrister Natasha Hadiza Akpoti-Uduaghan, the PDP Candidate for Kogi Central Senatorial District. This renewed all round attack on her is not unconnected with her rising popularity amongst her constituents.

Natasha has remained a lone voice in the wilderness, speaking against the none performance of governor Yahaya who took over the reign of Kogi State as a result of divine accident. His renewed mandate was gotten at gun point, which was produced sounds and blood akin to Nigeria civil war.

Since the the signing into law, the amended 2022 electoral act by President Muhammadu Buhari, the desperate and none performing governor has realized that it won’t be business as usual, hence, his resort to shortcut, urging security agencies to arrest and detain Natasha for what we believe, her only  offence is the fact that she is contesting against the unpopular candidate of the governor.

While trying his luck with security agencies, governor Yahaya Bello and his minions have resorted to sponsoring all manner of groups to launch campaign of calumny against Barr Natasha rising political fortune in kogi state.

In a recently deflated falsehood against the beautiful politician with brains, suspected agents of the governor alleged that she blackmailed her loving husband into signing an agreement before marrying him, an allegation the Indemnity Partners, has since disowned. It is on public domain, that one Jackson Ude alleged that Yahaya Bello’s wife, Rashida is dating former Big Brother Naija housemate, Pere Egbi. Rather that dispensing his energy to keep his home, the governor is busy fighting a woman. What a shame!

Nigerians and the world at large, watch with shock the video of some women celebrating Yahaya Bello and his “Tatatatatatata” election. It was that electoral robbery that led to gruesome murder of Mrs Salome Abuh, PDP Women Leader who doubled as women leader for Wada/Aro. The world knows that promoted insecurity in Kogi for their their for power.

The more Governor Yahaya Bello tries to use Insecurity to blackmail Natasha, the more he is exposing his weaknesses and obvious failure.  Section 14(2) (b) of the Constitution of the Federal Republic of Nigeria 1999 declares that the security and welfare of the people shall be the primary purpose of government. He can’t enjoy the blaring  siren in his convoy, in then turn around to blame Hon Natasha, you turning to a warlike zone.

It is on record that the N20bn bailout funds the Federal Government gave to Kogi State to pay their workers ended up in a Sterling Bank Fixed deposit account, yielding profit to massage the insatiable greed of some parasites in power. If not for the Eagle eyes of the EFCC, only God knows what would have been the fate of that money.

It is due to the absence of responsible in Kogi that brought good spirited money like Natasha into politics. As a mother, she knows how painful it is for children to go to bed without food. He rising profile shows that both the heaven and earth are with her. There is nothing Yahaya Bello can do about it.

Since the Presidential ambition of Governor Yahaya Bello hit the rock bottom, he has continue to behave like rabies infected dog, looking for whom to bite. We understand that he was scammed by politicians, he hasn’t been Normal since then, we therefore, wish admonish to him seek rehabilitation in an oversea trauma hospital, as we don’t believe any hospital in Nigeria can handle his kind of case. Barr Natasha is just a victim of transfer of aggression.

On the strength of the above background, we wish to:
1) Urge Security Agencies to fortified security around Hon Natasha Hadiza  Akpoti-Uduaghan from now till after election.

2) Call on the National Peace Committee led by former President Abdulsalam Abubakar to pay special consideration to what is playing out in Kogi, in calling all actors to act like, while allowing level playing ground, even if the odd does not favour them and their lackeys.

3) Call on the international committee to equally set up a situation room in Kogi State and most importantly, Kogi Central and ensure all promoters and perpetrators are slammed visa ban and other appropriate sanctions. 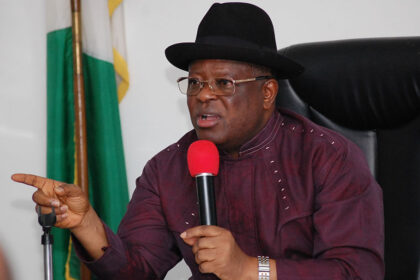