He also challenged them to present their candidate, Bola Tinubu, for debates and town hall meetings in order for the electorate to interrogate his proposed policies and programmes and make informed choice on who should lead them in the 2023 election.

Obaigbena, in a four-page rebuttal to an article by Onanuga and Alake, which was in response to an earlier statement by the THISDAY/ARISE News Board of Editors, titled: “Tinubu and THISDAY/ARISE Media Group and the Attack on Free Speech,” stressed that journalists were not the opponents of the APC presidential candidate in the forthcoming election.

The statement titled: “Lies Have Short Legs, They Do Not Run Far – The Fake News from Bayo Onanuga and Dele Alake,” and categorised into four parts, was signed by Obaigbena’s Chief of Staff, Fawuziya Mohammed.

The media proprietor insisted that “everyday the media calls on public officials and those who seek public office to account,” establishing that there was nothing personal with the APC candidate.

Starting with issues around the late Chief M.K.O Abiola and the June 12 struggle, Obaigbena pointed out that, when the late Abiola was the standard bearer of the Social Democratic Party (SDP) for the 1993 presidential election, he was a senatorial candidate on the platform of the National Republication Convention (NRC).

According to Obaigbena, Abiola then supported SDP’s candidate, the late Chris Okolie, leading to a strain in their relationship.

He further noted that he was also Special Adviser to the NRC National Chairman, Tom Ikimi in 1991, and later Hameed Kusamotu.

“Before and after the annulment of the 1993 presidential election, Abiola and Obaigbena were friends and remained friends till the end. Abiola was broad-minded enough to understand that Obaigbena, like his other friends in NRC, were competitors for power. But that competition ended, when Abacha took power and all true democrats moved against military rule.

“Indeed, Abiola’s last public appearance was an Obaigbena event at the Nigeria Institute of International Affairs (NIIA) on June 8,1994, where he took the Abacha government to the cleaners while demanding his mandate. After his speech against the Abacha junta, he went underground only to reappear in Epetedo, Lagos Island, on June 12,1994 to declare himself president.

“The rest, as they say, is history. Some weeks before the Epetedo Declaration on May 9,1994, Abiola and Obaigbena had met on a South African flight from London to Johannesburg for Nelson Mandela’s presidential inauguration. Obaigbena sat on one side of an aisle seat, while Abiola sat on the other side of that aisle seat with his wife Kudirat taking the window seat next to him.

“Abiola reminded Obaigbena that he had driven all the way from Ilorin to Lagos City Hall to attend his wedding in 1987. I then invited him to my event of June 8,1994. As we arrived Johannesburg International Airport as guests of the Mandelas, Obaigbena was witness to his claim of being the elected Nigerian President and his delegation was driven off in official motorcade while Obaigbena made his way to the Carlton Hotel, downtown Johannesburg (the same hotel most invited guests lodged), and later bussed to Union Building in Pretoria, venue of the inauguration, where he ran into Dele Olojede who was covering the event for a New York newspaper,” he explained.

According to Obaigbena, the military leader at the time, Abacha soon arrived and on his delegation were then foreign minister, Babagana Kingibe, Naval Chief Allison Madueke, former president Shehu Shagari and ex-Head of State Yakubu Gowon.

He added: “Although I promised to help, that opportunity did not come until 2003, when we started THISDAY South Africa, which soon became easily one of the best newspapers in the country, by every ranking. However, the establishment did not like it that a Nigerian-owned newspaper was shaping public opinion.

“A South African special security official once invited me to play golf and told me pointedly that they couldn’t have a Nigerian Newspaper Reporter at the (Union Buildings) State House.

“Despite the support of Mandela and Thabo Mbeki, who had become president then, the establishment insisted on South African ownership for THISDAY Newspapers.

“Shortly after that request, bank credit lines were frozen in South African banks despite presenting a $5 million Citibank guarantee from GTBank. The banks simply refused to grant credit to the newspaper.

“After a few crisis meetings with South African investors and Naaspers, and our refusal to cede editorial control in any co-ownership from the bigger South African media companies, we closed our SA operations after some $30 million investment over two years.”

In addition, Obaigbena stated that at ARISE News Channel and THISDAY, “We believe the narratives around Africa and Africans and the black race can only change, when we have strong global voices.

“We have used our ‘sorrow, blood and tears’ (apologies Fela) to pioneer this process in South Africa, Europe and the USA. It can only get better. Aljazeera has done it for the Arab world; we too can. Even at home, back in Nigeria, we are being misrepresented and libelled by some envious peers.”

Thus, contrary to the wild claims by Alake and Onanuga, the organisation did not owe any tax authorities in South Africa, adding that it also paid all its creditors in an organised exit strategy.

“If they have any such evidence to the contrary, they should publish it immediately,” he added, saying the debacle of THISDAY in South Africa was one of the factors that persuaded President Olusegun Obasanjo’s administration to cancel the South African Airways takeover of Nigeria Airways, given that Nigerian businesses were being discriminated against in that country.

Responding to the allegation about ARISE Networks Limited (ANL) UK, he said his disqualification as a Director was still a subject of litigation in the UK Court of Appeals and would not want to make further comments on the matter.

His words: “The Judgement made it clear that there was no evidence of any dishonesty against Obaigbena. Since those initial teething difficulties, other ARISE entities have traded out of the shortages and ARISE News Channel is now thriving in the UK, Europe, the USA, Middle East and 54 countries of Africa. We await the judgement of the Appellate Courts on ANL as to why and if we ought to have known that the FX shortages in Nigeria would not improve to continue trading.”

Clarifying on the Economic and Financial Crimes Commission (EFCC) and the Newspaper Proprietors Association of Nigeria (NPAN) refund, Obaigbena explained that the anti-graft body invited him and Executives of other national newspapers to clarify payments made to NPAN, when he was president at the time.

He revealed that the executives of all other newspapers involved (The Nation owned by Bola Tinubu inclusive), were also invited at the time to clarify the payments they received.

He stressed that he was not detained as he signed no bail bond, “and indeed has never been detained by the EFCC or the police in any criminal case, contrary to the fake news of Bayo Onanuga and Dele Alake.”

He, therefore, explained that the N500 million THISDAY refunded was compensation the Jonathan administration paid THISDAY for the Boko Haram bombing of the newspaper’s elegant Abuja office.

“The Jonathan administration paid compensation for, and/or rebuilt properties bombed by Boko Haram terrorists in Abuja, The United Nations and THISDAY inclusive. Again, when the Buhari administration requested refund, it was fully made. The property remains un-rebuilt,” he stated.

On staff salaries, he stated that the organisation has been very consistent in paying salaries regularly, as and when due every month at ARISE News Channel.

To this end, he maintained that, “No misinformation, fake news of Bayo Onanuga and Dele Alake will change Obaigbena’s global trajectory. The journalists at THISDAY and ARISE News Channel are doing their duty by raising pertinent questions.

“Rather than addressing our questions, Alake and Onanuga countered with wild and misleading allegations and fake news. We did not dismiss their allegations and have addressed them frontally. We now challenge them to respond with facts to the legitimate questions of the Nigerian people through their media.

“Present your presidential candidate for Town Hall meetings, debates and interviews by the independent media that last for more than 8 minutes, and not pre-arranged Townhalls, where questions are pre-set, prearranged and rehearsed.

“The resort to media bullying tactics, blackmail and fake news will not work. Journalists are not your opponents in the 2023 elections. When they go low, we go high.” 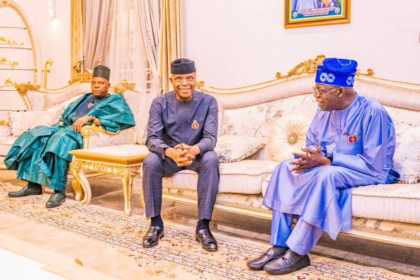